What is the best iPad you can pick to draw on Procreate App, right in 2021? Let’s take a look.

Since there is a lot to know, and Ipads have different versions that not all fit for the same tasks. Mainly, different screen sizes make this more debatable. Meanwhile, if you’re programmer indeed, see our the best code editors for ipad to code.

See our top picks- Android tablets for students to read

Aside from screen sizes, you’ll also have to consider display qualities, storage options, and performance chips so you make sure you’re putting investment in the right product.

Best Ipads for procreate app in 2021

Read down to find out which iPad is right for you. Know your preferences, your budget, and most importantly, the capabilities of each have been listed.

Screen-size of 10.2″ with a retina display. Despite its size, the pixels are incredibly dense. You get a more in-depth color taste.

With 32 GB storage, it’ll be fine to use the Procreate app because the files don’t consume much space as videos. Nevertheless, it supports the Apple pencil (generation one) tool that lets you draw your imagination effectively.

The rear camera has 8 Megapixels, which is quite impressive for an avid photographer. Despite that, the specifications aren’t high tech; it comes with an A10 Fusion Chip, which prevents it from delivering good performance in multi-tasking.

Additionally, editing videos will be problematic since the storage capacity will quickly run out.

So here is the overall great performer, under the reasonable price of 499$ with 62 GB storage. Twice larger than Ipad. Also, capable of delivering faster performance.

With this Ipad Air, not only will you be able to use Procreate without feeling a lag but also editing videos will no longer be a problem. The storage capacity and the specifications are in your favor.

The size of the display is 10.5’’, so that doesn’t make a big difference. Also, the screen quality is comparable to the iPad. By attaching a keyboard to it, it can be transformed into a portable laptop running an IOS operating system. It is so much more convenient like this.

The specs-side has most of its gems. The Performance-chip “A12 Bionic chip with Neural Engine” is super effective in multi-tasking. If it’s what your intentions are, a robust device that can let you do multiple tasks. You will find yourself comfortable enough with this iPad air.

This Mini iPad has the same specs as the Ipad Air, but it saves you about $100 in comparison with the Ipad Air in terms of features (64GB RAM, support for the Ipad pencil, attachable keyboard, and processor for performance boost).

Despite the fact, it’s great for multitasking and a lot cheaper in price. The display is small (around 7.9’’). It could be a big downside for people who want to have an iPad for the procreate app. Because the display size is an important factor while drawing an image.

Larger screens tend to produce more exceptional results, so it’s all a matter of preference.

The Ipad Pro has it all. An amazing liquid retina display that provides more detailed color textures. It has a big screen ranging from 11inches to 12.9inches. With 512GB up to 1TB storage available options, you can replace your laptop.

it supports the apple pen (second generation) and on its retina display. It gives a smoother and nicer feel while working on Procreate app using this iPad.

There is no doubt about the fact that this tablet has covered everything. Whether you are a full-time designer, video editor, streamer, or whatever your activities are, it is for sure that this tablet will exceed your expectation. Also, a 12mp rear camera is one of the pluses on this.

If you can afford this super powerful device, go for it’s going to be a long-time solution for many tasks.

With the procreate app, having a good stylus pen is more than a crucial factor. Speaking specifically, we all know there are only a few pens that can handle this job. The ones from Logitech are great alternatives.

Since apple’s pens are more sensitive, canvas can be drawn in greater detail. They also have features such as pressure sensitivity that produce thick and thin strokes, which is another reason you should use them.

Apple Pencil is a great tool, and they just released a new one called Apple pen 2nd generation. The stylus pen works with Apple models manufactured after 2019. The rest of the models are compatible with 1st generation pencils.

Ipads models other than (Ipad 1, Ipad 2, Ipad 3, Ipad mini 2,3) are not in the compatible list of working with Procreate app. The rest are listed below. By the way, it’s not just to touch the minimum requirements. Having more than that will give you a better experience.

Here’s a comparison table of the same iPads we discussed previously. Check out the specifications, compare again, and then purchase.

People who already have an iPad can check the details of their devices by following the below steps.

Open up settings> General> About

All the necessary details can be seen on this page. Including, storage, model number, software version and other details. 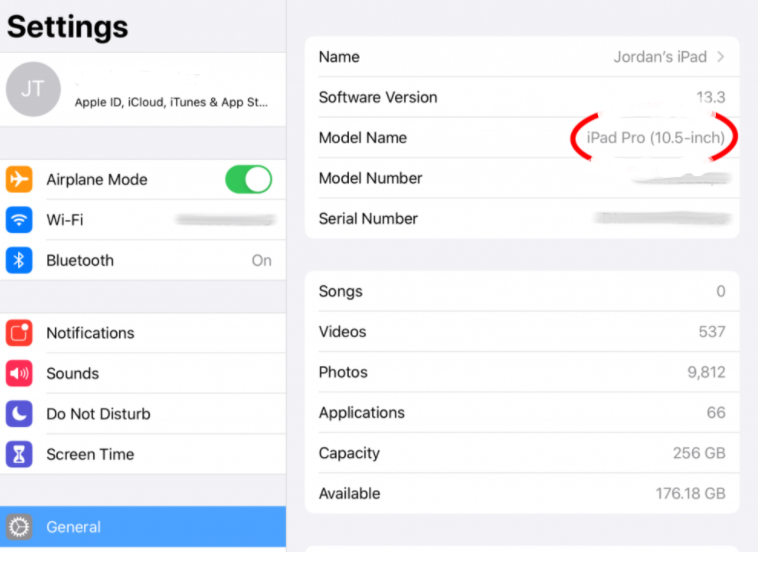 Before buying an ipad, first ask yourself what do you want to do with your ipad? As little points make a big difference while it comes to final selection. For example, the iPad mini has the most reasons why you should buy it. It’s powerful, more portable, and playing games and reading e-books give the best experience in the given screen.

Yet when it comes to using an ipad for a office work. Like a replacement over the laptop? Ipad pro has the most reasons for you to buy it. Because, larger screen size with high-tech specs make it stand out. Never forget, they’re also called two-in-one Ipads.

Rest of the options are between these conditions. They are not high-tech enough to offer a laptop replacement nor something we can say is best for gaming, unless you are fond of big screens.

This is why, mostly people prefer Ipads and Ipad air as they are not aligned towards a specific direction. Nonetheless, Artistic apps such as procreate give a delightful taste when used with these ipads.

Moiz here, he is a Blogger, a Creative Content Writer, and an SEO intern at the same time. He is passionate about what he does, energetic, incentive, with a positive attitude towards sociology.